August offers hot summer fishing ! By hot I mean both air,water and catching. With the water temperature being in the high 80s in Tampa Bay most of my charters have still been targeting Spanish Mackerel and Mangrove Snapper for the most part. It really only make sense as its a reliable bite and keeps the rods bent and gives my clientele a chance to take some great fish home for the table. On my Tampa Bay charters we have also been catching some Speckled Sea Trout.

Most fish targeted now have been in depths of 5 to 15 feet. It just makes sense as the deeper the water the cooler it is and this is where the majority of fish want to be. Take a second to think about it. Where would you rather be on a hot summer day? Sweltering in the heat or do you try to find the coolest location possible?

Catching Snook and Redfish is still possible this time of year. Either species is not what I would totally focus on while doing a charter during the hottest of months. For the clientele that would like to catch a Snook or Redfish I will usually target them for a short period of time during the charter. The bite usually doesn’t last long so you have to make every opportunity count.

My charters are starting earlier this time of year. I have been picking customers up at the dock and we have been on our way to the fishing grounds by 7:30 am. Getting an early start is key to beating the summer heat when fishing Tampa Bay.

I get a lot of folks on board who tell me they don’t like Spanish Mackerel. If you are one of those people you really need to rethink this. I have found that most folks who say they don’t like Spanish Mackerel have not had the fish handled properly from the time it came out of the water to the time hit it the fillet table. Two key factors in handling Spanish Mackerel after they are caught is bleeding them out and getting them on ice. It makes a huge difference in the fillets once the fish hits the fillet table. I prepare the fillets two different ways for customers. One way is for folks who own a smoker and would like to either eat the meat smoked or process it to use as a fish spread. It makes some of the most delicious fish spread I have ever eaten. The other way is to fillet the fish removing the skin and small bloodline down the middle of the fillet. The biggest mistake I see at the fillet table made is people leaving the bloodline in the fillets. That bloodline is what give the fish a strong undesirable flavor when either baked ,broiled or fried.  Another mistake I see in the process of preparing fish at the table is folks who rinse all the fillets down with fresh water. Fresh water breaks down the enzymes in the fillets giving the meat a mushy grainy texture. You should only rinse your fillets just prior to cooking.

Cleaning folks fish is part of the service I offer on my charters. I feel that putting a little extra time into doing it properly makes all the difference in the world as to the final outcome when that fish hits the dinner table.

Here are a couple of pictures of some catches we had on recent charters. I am also posting a picture of my homemade fish spread. I eagerly share the recipe from start to finish for this spread with any of my customers who would like to make there own. 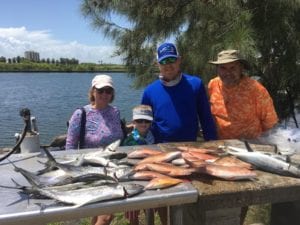 Thank you for stopping by to read my reports you can also check out my reviews of recent charters on Trip Advisor.