February Tampa Bay Fishing Charters have been filled with some steady action. My clients have been keeping the rods bent on some great Mackerel action. The Spanish Mackerel just doesn’t get the respect it deserves, at least not until you have hooked into one and felt the power from the speeding bullets. Spanish Mackerel also make for a great dinner. 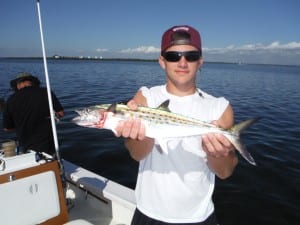 Sharks have also been on the ballot. They have been ranging anywhere from a couple of feet long up to 4 or 5 feet Hammerheads. Talk about a fight on light tackle!  Just yesterday we  landed a 4 foot Hammerhead Shark on 10# test and med action rod with small spinning reel. The next photo is a Hammerhead shark. We do our best to release these unharmed next to the boat. 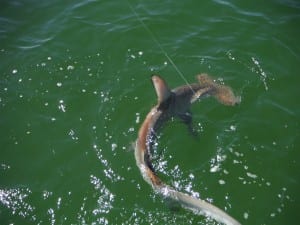 We have also been catching other species on our charters this month. Most intentionally and others as bi catch. Sheepshead have been a customer favorite to take home for dinner. Unlike the northern Sheepshead I have heard of it is one of the tastiest fish Tampa Bay has to offer. They can be a little tricky to catch but very addicting and keep you coming back. Silver trout have also been on the menu. Mostly in the 10 to 12 inch range these pan fryers are very tasty and for those wanting to fill the box with fish to fry perfect.

The next picture is of a Sheepshead caught on a recent charter. 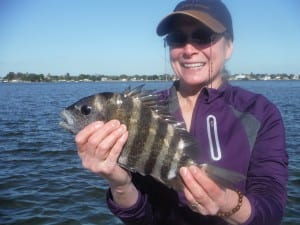 And sometimes you just hook into something you just didn’t mean to. Although they are not sought after on our charters the Cow Nose Ray can offer up a nice fight. Sometimes you just never know what your going to catch! 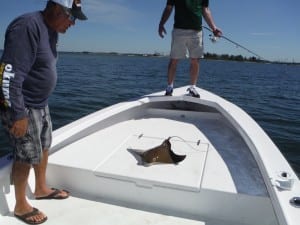 It looks as though we will be making a nice transition  into Spring this year. We are into our 3rd week of February and experiencing temperatures in the mid 7os. As our Water temperature rises we will begin to spend more time targeting other species such as Refish, Snook and Spotted Sea Trout. Spanish Mackerel will still be around as will other species that make Tampa Bay and anglers Paradise.

Thank you for stopping by to read my reports. I hope you will book your next fishing adventure with me.