Fishing Charters Tampa
What a great month it has been for fishing charters Tampa! We have had some awesome trips with a lot of awesome people. I have been very excited to be back to work and putting people on some fish to either catch and release or take home for a fresh fish dinner.
The Mangrove Snapper fishing has been on fire! Spanish Mackerel are here and ready to pull some drag and bend the rods. Snook fishing has been good with some fish in the 10 to 15 pound range coming boat side. Snook season is closed so we do our best to handle these fish with care and properly revive them before releasing them.
Gag Grouper season is open. On the right tides we have been catching these in water as shallow as 8 feet. Getting keeper sized grouper is no easy task. This style of fishing is not for everyone. It requires you to be on top of your game as these fish hit hard and fast and will literally be in the rock in the blink of an eye. If you are ready to test your skill level on a fishing charters Tampa this may be a trip for you.

As I stated previously I had some awesome people out on my Tampa Bay Fishing Charters this month. I really enjoyed having this group of Plant City Strawberry farmers out on the boat. Lee his wife Dixie and Keith and his wife Rhonda put a really nice limit of Mangrove Snapper in the box along with a few Mackerel for the smoker. 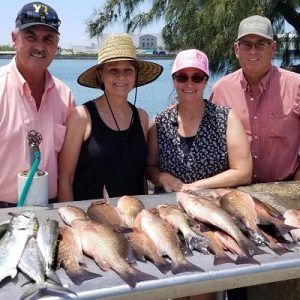 I also had a great time with Pat and Rita from Pennsylvania. They were down here on a short vacation and actually going to be married here and spend there honeymoon fishing.
What a great couple that I really enjoyed spending time with.

Rob has been coming to Tampa to fish with me for the last 10 years. He typically comes and spend multiple days. This time we did two half day fishing charters Tampa. Rob is primarily a catch and release fisherman when he comes to Tampa Bay so I took him and his friend Paul both from California Snook fishing. The tide was right and they were both able to land several Snook in the 10 to 15 pound range. 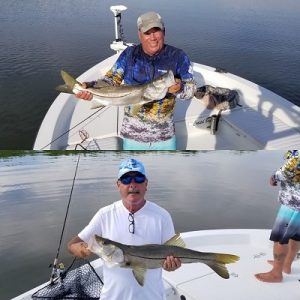 Bill went on a Tampa Flats and Bay Fishing Charter with me to do some shallow water Gag Grouper fishing. Bill is also a catch and release fisherman but he enjoyed the fight of the shallow water Grouper. He also landed some drag ripping toothy Spanish Mackerel. 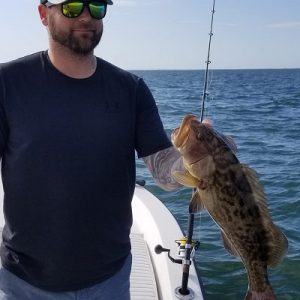 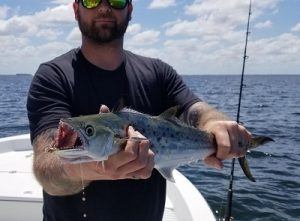 Overall the fishing was great this month of June. If you would like to book a charter feel free to contact me and we will put a plan together for your next Tampa Bay fishing Adventure.